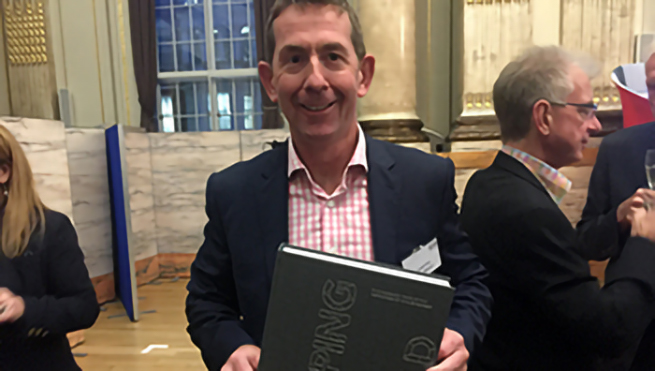 To mark its bicentenary, the Institution of Civil Engineers has produced a commemorative album entitled Shaping the World – and Albion Water is featured as a sustainable solution to household water usage and managing water on a local level.

The beautifully designed book showcases the 200 structures and engineering projects that have had the greatest impact on our lives and celebrates the individuals and organisations that deliver the vital infrastructure we all rely on.

Produced in partnership with publisher St James’s House, this inspiring hardback book was launched at the Institution’s impressive headquarters just off Parliament Square in the City of Westminster, London.

Our chief operating officer Gareth King is quoted in the book and attended the launch. He said: “We’re honoured to appear in this prestigious publication amongst some of the most iconic engineering firms and structures in the country.

“Featuring in the book has been a great opportunity to showcase what sets us aside from the regional monopoly water companies and how housing developers can benefit from partnering with us.”

A beautifully presented coffee-table book of the highest quality in terms of research, writing and design, Shaping the World explores not only key stories of inspired engineering, but also sheds light on the major industries and commercial sectors that surround the discipline.

As well as boasting striking images that convey the magnitude and beauty of the featured engineering projects, the publication serves as a carefully curated guide to architects, consultants, infrastructure companies, environmental firms, industry-related educational institutions and other organisations whose preeminent status in their respective fields warrants their inclusion in this book.

Speaking at the launch, Richard Freed, the CEO and owner of St James’s House, said: “The commemorative ICE album is yet another prestigious book in our long list of publications to mark landmark events, such as the RAF100 celebrations that heralded 100 years of the Royal Air Force.

“We are extremely proud of this book and honoured to be working alongside such exceptional companies and organisations on this project.”

Some 500 dignitaries from around the world, as well representatives from television and print media, attended the launch of Shaping the World.

We use cookies on our website to give you the most relevant experience by remembering your preferences and repeat visits. By clicking “Accept All”, you consent to the use of ALL the cookies. However, you may visit "Cookie Settings" to provide a controlled consent.
Cookie SettingsAccept All
Manage consent

When you visit any website, it may store or retrieve information on your browser, mostly in the form of cookies. This information might be about you, your preferences or your device and is mostly used to make the site work as you expect it to. The information does not usually directly identify you, but it can give you a more personalized web experience. Because we respect your right to privacy, you can choose not to allow some types of cookies. Click on the different category headings to find out more and change our default settings. However, blocking some types of cookies may impact your experience of the site and the services we are able to offer.
Read our cookie policy.

Necessary Always Enabled
Necessary cookies are absolutely essential for the website to function properly. These cookies ensure basic functionalities and security features of the website, anonymously.
Functional
Functional cookies help to perform certain functionalities like sharing the content of the website on social media platforms, collect feedbacks, and other third-party features.
Performance
Performance cookies are used to understand and analyze the key performance indexes of the website which helps in delivering a better user experience for the visitors.
Analytics
Analytical cookies are used to understand how visitors interact with the website. These cookies help provide information on metrics the number of visitors, bounce rate, traffic source, etc.
Advertisement
Advertisement cookies are used to provide visitors with relevant ads and marketing campaigns. These cookies track visitors across websites and collect information to provide customized ads.
Others
Other uncategorized cookies are those that are being analyzed and have not been classified into a category as yet.
Save & Accept